"The Help" lied to me


Obviously this scene was memorable to me.  The minute that clueless blonde lady stuck her finger into a frying pan full of boiling grease because "it looks like frosting!" I fell in love with her.  Hence, when our stupid toilet seat hinge started squeaking, this was the first thing that popped into my mind.

Well, that's a lie.  WD40 was the first thing, but this scene was a quick second.  Were there warning signs?  Sure.  I never use mayonnaise... Crisco as a makeup supplement is just an awful, awful idea...  and there are fewer things to bring on a heart attack faster than deep frying in Crisco.  I probably should have assumed the squeaky hinge thing was just as ill-advised.

'Wouldn't it be nice to fix this with something non-toxic', I told myself.  'And to take a wise, sassy character's advice!  Besides, what am I going to do, walk all the way across the driveway to the garage?  No thank you!'

Which is why our toilet seat still squeaks every time it's lifted and lowered... and why it's now covered in globs of glistening, greasy, butter-scented Crisco.

Email ThisBlogThis!Share to TwitterShare to FacebookShare to Pinterest
Labels: Around The House

The Fellowship Of The Skis

Since Lindsey already took care of the heavy-lifting by posting a nice Ski Trip to Austria blog entry, I suppose I can just say thanks to the awesome person (or persons) who discovered and turned in my cell phone after it stupidly hurled itself from my body somewhere around here:

Contrary to popular belief, the Alps are actually an expansive European mountain range filled with miles and miles of idiotic American tourists trying to commit Snowboard Seppuku.  The bumps and bruises were all worth it though, when I got to see places like this:

It wasn't only about the skiing though-- this weekend had a bit of something for everyone:


Thus concludes one of those posts that veers away from our normal day-to-day minutia and instead makes you feel a little bit bad about not living up to the awesome standards set by our online personas :-).

P.S. If you ever find yourself in St. Anton Am Arlberg, Austria, don't pass up an opportunity to check out this awesome place.
Posted by Scott at 17:30 1 comment:

Lounging on the plush couch, glass of excellent wine in hand, watching the girls run around with Miles & Elliot (1 and 3), it occurred to me.  "Guys, we should form a commune!!!"

A commune in the Alps.  With a downstairs spa... and maid service... and a personal shopper... and midnight sledding followed by spiked hot chocolate... with ridiculous games of charades... and two dozen eggs getting scrambled every morning.

Days spent playing/ snowboarding/ skiing outside in air fresher than a York peppermint patty, and nights under a sky so clear the stars put our (we as collective bedazzled ladies in the group) diamonds to shame.

"Jackson!  Laura!  Look how classy you guys look in these robes that come with the rooms!  These are so comfortable I could live in them... These should be the official outfit of the commune!!!"


Between my stupid back (has spasms again, possibly a slipped disc) and my stupid sprained ankle, I did not go snowboarding.  Or even leave the house.  Still one of the best vacations of my life.  Desperately wish I had a picture of all of us in our robes, wine goblets in hand.  Hugh Hefner really is onto something.

As I learned how to get by on crutches (it turns out the key is other, able bodied people being awesome and helping), the girls did something far more interesting and started gymnastic lessons.


Now that I've discovered how to use Windows 8 (and by 'discovered' I obviously mean 'Scott made a pictures shortcut so easy a Lindsey can do it), these posts are getting long awfully fast.  Will hold off on resolution update pictures until next time :-)

Email ThisBlogThis!Share to TwitterShare to FacebookShare to Pinterest
Labels: Vacation

First off... thank you.  When I wrote last week's post, it was mainly because there was something I felt needed to be said.  Without a trip to some far off place, or pictures of the kids, I expected minimal viewing, but thought that if even one person read it and had a change of heart, a change of thought, it would be worth it.

The reaction we got was more than we ever could have hoped.  Thank you for the emails, the messages, the stories shared, the amazing news articles forwarded, the offers of help, donations to the cause, and most of all for the incredible outpouring of love and support.  It is our most viewed post to date, more than double any other we've done, and seen from ten countries around the world.  It's been like wrapping ourselves up in a really big, really far away blanket of niceness :-)


Devoted readers/ watchers will notice somewhere around minute 2, the camera pans down to a boring building.  A moment before, an SOS flare had been shot off and landed in between the two houses, but went out a couple seconds before we reached it :/

I've never been big into resolutions, but I do adore regularly scheduled honest assessments.  I determined that I want to put energy into:

And, since we have a blog, it's going to be a fun journey you're all coming on with us :-)

Making healthy foods & products
...it appears it's not just our pictures, but all pictures I'm inept at finding.  This post may have to wait a few days until I can get a tutorial.  In the meantime, here are links to all of the awesome new discoveries we've made lately.

Family Traditions
So far they're all based on food, and I'm not sure that counts.  They *really* love pizza Friday & Sunday morning pancakes though.  Enough that Avalon broke into the fridge and was guzzling syrup out of the container like a drunken elf, and Kylie requested pasta with maple syrup for dinner.

More Blogging
I think this post says it all :-)

[Had I any computer skills whatsoever, this is where I'd place some fun around-the-house type photos. ] Next up: ski/ snowboard trip to the Austrian Alps!

Email ThisBlogThis!Share to TwitterShare to FacebookShare to Pinterest
Labels: Around The House

I am *not* Adam Lanza's mother

"Scott, you need to come look at this."

I laid motionless in my bed, scanning the symptoms over and over again.  It was like a horror montage- those  two minutes of reading illuminated years of confusion as scene after scene, memory after memory flashed through my newly comprehending, devastated mind.  Waves went through me-nausea, panic, disbelief, guilt, each feeling reaching a crescendo before crashing into the next crippling emotion.

There they were- all the quirks, the struggles, the endearing uniqueness, all on the screen.  All symptoms of autism. Kylie had just turned three.

The next few months were filled with despair, self-loathing, and worthlessness unlike I've ever known.  Did I do this?  Had my unhappiness about my unplanned pregnancy somehow trickled down into her little fetus brain and fundamentally changed something?  She's our firstborn... I had no idea what I was doing... if I'd been a better mom, would everything have been fine?

Before that day, before my dad ever so gently suggested I look into it as a possible explanation, I knew nearly nothing about autism.  Some contestant on America's Next Top Model had it.  Jenny McCarthy was discouraging vaccinations because of it.  That was the grand total of my knowledge.

I haven't made this diagnosis public knowledge for a couple of reasons.  This is the most personal thing I have ever written, and the most vulnerable I have ever felt.  It pains me to write, and brings me back to a terrifying and hopeless place.

Secondly, and more importantly, it's not my story to tell, it's Kylie's.  Sharing something so deeply personal should be her prerogative, and long before she & her peers are literate, I'll delete this post.

So why write it at all?  Because I'm not alone in my ignorance.  Though prevalent at an alarming rate, it's a condition with very little understanding and an even littler budget.  What tipped the scale for me has been the Connecticut shooting's aftermath.  I see more people aware of autism... and associating it with one of America's worst atrocities in recent memory.

After the tragedy, [name removed for privacy, but one of Kylie's classmates]'s parents got a phone call from relatives back in the states, asking if they were afraid someday their son would murder them and go on a killing spree.  I don't want that to be people's first association when they meet my beautiful, brilliant, tender-hearted daughter.  So without unloading a year's worth of research on you, here are some things to know:

All kids with autism are not young Adam Lanzas, nor are they future Einsteins.  They are simply kids.  Kids in a big, confusing, often alienating world, who are very grateful for understanding, patience, and compassion. 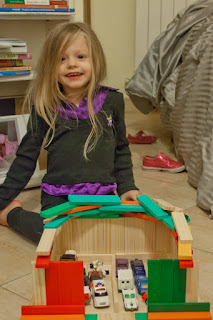