I had this great idea that we'd take an hour or two every Sunday to recap our week and connect with everyone.  I hadn't planned on being so immediately and warmly enveloped by Italy, nor had I planned on spending every Sunday devouring glorious meals with our landlords.  We'll try to find a different, regular time to write, and in the meantime this is some of the stuff we've been up to.

The process of moving out of the hotel and into our house seems eternal, but last week we signed a pre-contract.  We hope this means we'll be moved in by the end of the month.  After the meeting, Enzo invited us over to the house for another amazing lunch.  Nonna read Italian Lion King to the girls, Senior Garofalo sang Italian songs while the girls danced outside, and somehow by the end of lunch it was dark outside and past dinnertime :-)

We finally went to Carney Park which we'd been hearing about nearly since we arrived.  At some point, the base realized that Americans would eventually want to play some baseball, climb some rock walls, and play some Nintendo Wii, so they built a park.  In the crater of a (extinct) volcano.  America, you're pretty awesome sometimes :-)

In addition to several playgrounds, fields, pools with slides, the park also has cabins available for camping and (we were told) one of the best views in the city of New Year's fireworks.  So if any of you are thinking you want to do a little something special this New Years, let us know and we'll get you a cabin too, and you can spend New Year's Eve hiking in a volcano in Italy with us.

(I think Scott took pictures of the park and I'm reserving this spot in the hope that when he gets home from work, he will put said pictures here)

Two days after the pre-contract was signed, base did an inspection of the house to make sure it was okay for inhabiting (it was).  After the inspection, Laura (Enzo's fiancee) invited us to her house for dinner to meet her parents.  Scott helped Enzo with his computer while Laura and her mom taught me Italian words for baking items as we made a cake (torta, as it turns out).  There was a moment of horror when the realized I was a vegetarian, but Scott assured them that I would still cook meat for him and anyone else who visited, so all was forgiven :-)  Closed out the night with Laura's parents teaching the girls the Italian version of "ring around the rosie" (Giro, Giro, Tondo).

...every family we have met has been a blessing.  Obviously not speaking the same language is a huge barrier, but in some very meaningful ways it cuts out a lot of nonsense, too.  When you're struggling to fit each sentence together, there is no room for pretense or posturing.  Like the communication of toddlers, it is clumsy, inefficient, and completely sincere... and typically just focuses on the most basic of needs, which in Italy is always food.

The weather has been fairly bruto the last several days and we'd more or less resigned ourselves to sitting around the hotel room doing a whole lot of nothing (including NOT writing in this blog), but today we finally decided enough is enough and decided to take a drive.  Highlights included the Caroline Aqueduct and the small town of Sant' Agata de Goti, where we got up close and personal with some rarely seen snow in Southern Italy.  Lowlights included not being able to find anywhere to eat anything at all at 1 pm on a Sunday.... 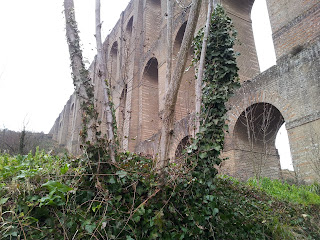 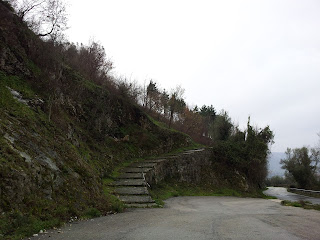 We signed all of the contract paperwork and the movers will deliver all of our household goods tomorrow!  All of the girls' toys and clothes and whatnots that have been packed up cold and alone since September will finally get to see the light of day.  Officially our move-in date is Friday to give time to transfer over the utilities and get all the odds and ends sorted out, but it will be nice to at least begin the unpacking/living a normalish life process.

We'll be sure to post some more updates as we get settled in to the house, in the meantime, here's another cornucopia of pictures from some of the things we've done the last few weeks :)

P.S. typing is significantly easier without that stupid cast on my hand! -- Scott

Italian women aren't constantly experiencing car trouble
Me: Ooooh I want her boots! And hat!
Scott: noncommittal noise
Me: Do you see how cool and composed people are here? That poor lady's out here, car broken down on the highway, and she still looks classier than I do on my best day. I really like her style.
Scott (glancing up) : She is a hooker
Me: But... she's wearing a a pea coat.

Scott assures me that they'll hooch it up once it gets warmer. I certainly hope so because it's a real bummer getting outclassed by prostitutes.

Lonely Planet is kind of a prick
We found a babysitter and planned a grown up day out. Scott did some research and decided to take me to Lonely Planet's #1 don't miss attraction in the region. Which, we discovered upon arrival, is privately owned and not open to the public. 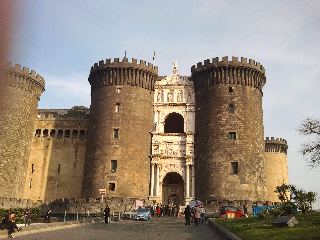 As we walked into the baron's chamber, we stumbled upon a meeting of some type. Our Italian wasn't/ isn't good enough to understand most of it, but we gathered that the participants were upset about something finance related.

Maybe it was the amazing acoustics, perhaps the impassioned Italian speaker, or, you know, that it took place in a castle, but there was a much different vibe than the town hall meeting I went to in Vermont :-)

Other castle highlight was this door which was taken as a trophy and brought to France but the boat was attacked on the voyage and in the process the door was shot with a cannon that is still embedded on the door's lower left side.

Italians know food better than I ever will
Our friend Eric had the same epiphany, and when the restaurant owner from next door came to take our order, Erik said (in Italian, because he's clever like that) "I want to eat what you want me to eat." Our lives and waistlines will never be the same :) Five hours, nine courses, two bottles of wine, and a bottle of limoncello later, we were officially in love with Italy/ the owner/ each other/ everything :) 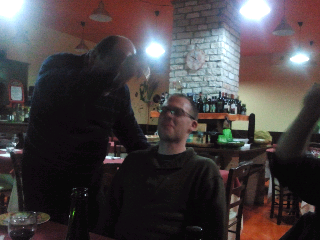 Apologies for the blurry photo, but this is the owner literally spoon feeding us when he realized there were 2 pieces of pasta left on our plate.

I'm not smartphone savvy enough to make it my main way of communicating
As evidenced by the several week gap in between this blog and the last.  Henceforth will make sure to get on the computer :-)
Posted by Unknown at 08:01 No comments: