Gabe continued his awesome streak and watched the wee ladies so Scott and I could have a grownup weekend.  In Germany.  Nestled between the Black Forest and thermal spas.  Life is just so full of lovely sometimes :-)

We started our Saturday with a drive through the Black Forest to see some castles. 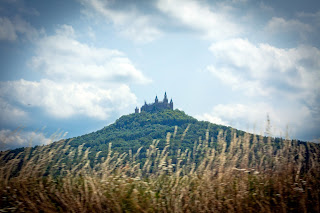 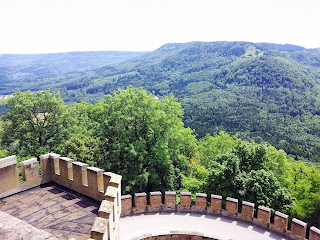 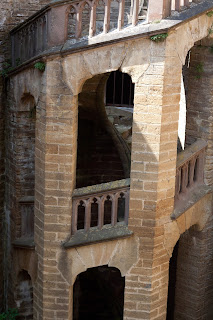 As predicted, my rapidly expanding belly quickly grew hungry and we had lunch in a castle listening to a fairly great band.  I think they were local high schoolers, and we were serenaded with Rolling in the Deep, Another One Bites the Dust, and other surprising-in-a-castle selections at Burg Hohenzollern.
We stopped at Schloss Lichtenstein on our way back, and it had a beer garden and ropes course!  Well done, you!  Followed up our castle voyage with a trip to Caracalla Spa.  I want to describe it.  I wouldn't do it justice.  It's kind of like the best pool day ever... in thermal water at varying and awesome temperatures... with little kiosks containing juicers... and an array of saunas... or dampfbad... just delightful.  Evening concluded with dinner served to us by people in lederhosen that went until 11:00.  I dozed off at the table around 10:45 :-)

Sunday we went to Freidrichsbad spa, which was a borderline religious experience. According to Mark Twain:

"After 10 minutes at Freidrichsbad, you forget time. After 20 minutes, the world."

Again, I'm not going to do this place justice.  I'm certainly not going to outdo Mark Twain :-)  However, it was like being brought back in time, and once you arrive, finding that you're an aristocrat... or super back in time, a Roman senator.  The spa as it stands today was built in 1877 and was made to cater to the aristocracy and royalty of the time.  The original spa, Acqua Aurelia, was built in 69 AD, and the ruins are still recognizable and open for touring.

At its most simplistic, Freidrichsbad is a series of thermal baths, saunas, scrubs, and massages.   The first eight stations gradually raise your body temperature (with an amazing soap and brush massage midway through), then stations 9-13 lower your body temperature back to normal.  The experience ends with a cream massage, being burrito wrapped like a newborn in a quiet room (we both fell asleep) and a leisurely tea and reading time to re-acclimate to the world you forgot existed.

The rest of the weekend was spent strolling through the tranquil town enjoying life, but now that we're back in sweaty Naples I'm getting too jealous of past-me to write about it, so here are some pictures and I'll caption them for you and call it good :-)

And now, for your viewing and educational pleasure, some awesome German words courtesy of Ryanair: